growing up outside the box: alternatives to processed food and television

I love role playing – really truly love it. Part of me has always longed for a life in musical theater (thanks most likely to watching The Sound of Music a bazillion times as a kid), and struggling to some extent with self acceptance and social anxiety throughout my life, role playing allows me a chance to let go of whoever I think I am or want to become and just exist. With lines already written for me, the tone of my voice and mood determined by character, it can be a welcome reprieve from playing mom, responsible for the physical, mental and emotional well-being of two people all day long. Playing werewolf entails no responsibilities beyond growling and pursuing my next victim. So easy. And yes, she loves when I play werewolf.

Life as a toddler has got to be just downright wretched at times, and I’m sure role playing serves as a vital tool for relaxation, just as it does for me, in addition to helping kids learn about the world and how we all fit together.

Enter the princess dilemma. I am staunchly anti princess for a variety of reasons. Other characters encourage children to be adventurous, chivalrous, and compassionate, to explore super powers, to conquer the world or save it from an evil tyrant, to think twice about stealing porridge from unsuspecting bears…all good lessons. But what does a princess teach them? She teaches them to obsess about their bodies, their clothes, material wealth, and of course, to wait for prince charming so their lives will be magically transformed into a constant state of bliss. Happily ever after is a lie, a completely unfair expectation that sets our little girls up to be disappointed and unprepared for the alternative, which of course is, simply, life. And life is awesome. Life is magical and wondrous, it’s depressing and painful, it’s ecstasy and misery all jumbled together and it’s worth living. Even without the castle and crown. Even homely and overweight. Even if prince charming never comes or existed in the first place or if he turns out to be a she. The typical princess story doesn’t offer anything of value for me, and so for nearly three years I was successful at avoiding all princess books, movies and discussion with my little girl. Random people on the street would walk by saying “What a little princess” and though I might smile politely and resist rolling my eyes until they’d passed us, I would not acknowledge the label or agree with their comment and I certainly never explained to my daughter what they were suggesting. I knew I’d have to deal with princesses eventually, but I felt avoiding the princess mentality so prevalent in our culture today was imperative to raising a strong, emotionally healthy girl.

One month before my daughter’s third birthday, the inevitable happened. Ella learned what a princess is and became mildly interested in playing one, which sent me panicking, scrambling to find princess books that downplayed beauty and marriage. I wanted to make it clear that the typical storybook princess, being a slave to fashion who’s banned from running through mud puddles, leaving the house with unbrushed hair, or dashing into the woods to examine rotting logs, spider webs, and animal tracks whenever her adventurous heart feels drawn to do so, should be pitied rather than envied and imitated! These are sentiments I felt sure my daughter would back me up on. But despite my reminding her of the harsh realities of royalty, this was a role that called to her and needed to be explored, just as the role of dragon, basilisk, gelfling, and fairy had, and I forced myself to play along with a smile while hoping the fascination would soon be exhausted. What I needed was a princess book with a feminism message post haste. (Why oh why didn’t I already have one waiting in my closet??!!)

The Paper Bag Princess comes to my aid the next day – a classic at this point, being in print over 25 years, though I’d never heard of it before starting my search. Author Robert Munsch writes a very straightforward story of a princess with fancy clothes and enormous castle, betrothed to the dashing prince Ronald…you know, the usual baggage every storybook princess is laden with…only to have it all destroyed by a big green dragon by page 2. So far, so good I think. Finally, here’s a book written to allow the princess the opportunity of heroinism, for by page 3 she’s chasing after the destructive dragon wearing nothing but a filthy paper bag and misshapen crown. It doesn’t take long for princess Elizabeth to outsmart the dragon so she may rescue poor useless prince Ronald, held captive in the dragon’s lair, but when she opens the cave door to save her betrothed he reveals the trouble with royalty, thanklessly dismissing his heroine because she smells bad and looks like hell. “Come back when you are dressed like a real princess” he snarls. I see his skinny finger poised accusingly at princess Elizabeth, piercing her with shame and feelings of inadequacy, and I hope she beats him unconscious with his stupid tennis racket which never leaves his hand, and seals him in the cave for the dragon to make roast Ronald for dinner. Whether she does or not isn’t explicitly written, but our heroine does tell prince Ronald that despite his pretty appearance he is nothing but a bum and she won’t be marrying him after all. Into the sunset Elizabeth dances, arms outstretched, in her paper bag, sans crown…just a girl who now values herself instead of her possessions or status, and knows freedom because of it. Well done Munsch, and thank you. Playing Paper Bag Princess really is fun, and allows me to indulge in the fascination without feeling my morals compromised. 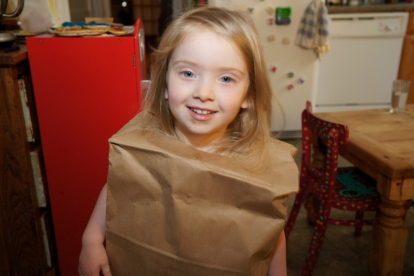 Other nontraditional princess books that surfaced in my quest, but I have yet to read:

The Princess and the Dragon by Audrey Wood

Not all Princesses Dress in Pink by Jane Yolen